How I Almost Got Thrown Out of Disney World

In case you did not know, I spent 3 days last weekend attending a Mastermind Workshop called “How to Disnify Your Business.” The workshop studied all of the things that Walt Disney did to create the theme park, make it an incredible experience, and how we could adapt those things to Prestige Martial Arts. 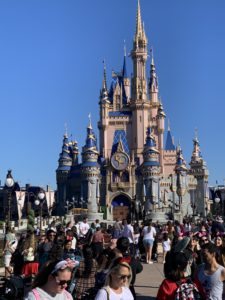 Needless to say, I have a long list of great things that are going to be added to the program that are going to blow you away – but more on that later.So how did I almost get thrown out?Well, part of the workshop was a walking tour of Epcot and the Magical Kingdom. As we were touring the Magical Kingdom, we stopped at a building with stained glass and no signs. If you weren’t looking for it, you would likely pass right by without a second thought. But, we learned that this building is part of the very exclusive Disney Club 33. This is a very private club that costs $33,000 to join and $15,000 a year to belong to, and it is also one of the only places you can drink alcohol.Because most people don’t know about this club, let alone where it is located, a private security officer overheard our guide explaining this, which got his attention immediately. He radioed his supervisor and began to follow the group.About 20 minutes later,  a security manager stopped us and asked us who we were and what we were doing. Our guide explained we were learning about the park and how Walt designed it. The manager said, “I am sorry. It is illegal to give private tours of the park, and I am going to have to ask you to leave immediately.”It was clear that we had a problem. As I looked around, I noticed several other security members were standing by, waiting to assist. This wasn’t looking good.Our guide explained that had been doing this for the past 8 years and that everything was set up through the Convention Services.The security manager explained that we were going to be escorted off the property if we didn’t leave voluntarily.Our guide is on the phone calling his contact.The security manager is on his phone calling his supervisor.We are watching all of this unfold, wondering what is going to happen.After about 15 minutes, the security manager steps up to our guide and reaches behind his back. We all thought, uh oh, Vance (our guide) is about to be handcuffed, and we are going to be thrown out.But instead, the security manager pulls out his business card and says he has cleared the group with his supervisor and we are welcome to continue the tour. He further explained that Disney World sees a lot of people “claiming” to be employees giving illegal tours, and they do not tolerate that.Everything ended with smiles and handshakes, and we were allowed to continue on our way.So not only did I learn a lot about the park, how it was built, and why it was done this particular way, but I also learned that Disney works hard to protect its reputation and its guests.Keep your eyes and ears open for some incredible Disney Magic coming to Prestige in the coming weeks.If you are not a karate family member yet, we would be happy to schedule a 5-Minute Discovery Call to get your child started on the journey to improving their Confidence and Leadership Skills.
Just visit our website www.PMATroy.com to get started.

(This is Figment. Ryu’s Cousin.)