How To Teach Your Child to Believe in Themselves

Hey, parents Shihan here from Prestige Martial Arts, and I want to talk to you today about the life skill of Belief. More importantly, how to teach your child to believe in themselves. Here at the karate school, we are working on,

“Belief is having a Yes I Can attitude.”

Teaching the children to have a positive mindset and how to be able to get rid of that negative self-talk or that feeling of fear that they have grown up.

There is a circle of influence that shows the different levels of influence or trust, and I use this with the kids to be able to show them some specific things. They get a little better idea when they can see what I am talking about and use the formula. What I suggest is that you download it and have your kids draw the circles and then walk through each of the steps. Click Here to see an example.

It is going to be a little bit different for each person. So let me explain. It is a layer of circles. On the inner circle, you are going to put the word “me”. Your child needs to be able to develop trust in themselves first. If they don’t trust themselves first, nothing else is going to matter. This is one of the key elements that parents don’t understand sometimes, and they get frustrated. When you get into that argument with your child when they say,

And you are banging heads against each other. In that instance, your child has not internalized the Belief that they can do it, and until they do, you will never convince them otherwise.

The second circle is going to be Parents. If the Parent believes, but the child does not, nothing is going to get accomplished. First, they must believe in themselves, then get the support of their parents who believe in them so that their beliefs can grow.

Here is where it is going to start to vary a little bit for each person. After parents, the next circle (or you may put it in the same circle as Parents) is Family. Remember, there are no wrong answers. It’s a matter of what you think, your specific situation, and how you are going to use it.

So one example would be:

So what starts to happen a lot of times when I work with kids who are upset and they come in and they have had a bad day, and they will say something like, “Tony said I was ugly and couldn’t play with him today, and it really hurt my feelings.”

Here comes the power of the circles!

I am able to use these circles and teach them that they are putting their focus in the wrong place. What I do is ask them,

“Do you believe it’s true?”

If somebody at school said something nasty and it hurt their feelings, have them look at their list. Is that person on the list? So at that point, if they are in the very outside circle, if they are an acquaintance, then it doesn’t matter what they say because everybody in the inner circles says something different.

By making this a visual process and walking your child through each step, they start to understand better where to put their focus and thoughts.

Another thing I have been working on with the kids is that middle ring of friends. I have them create a list of:

“What are the requirements for you to be on my friends’ list.”

What does that person have to do?
What characteristics do they have to have?

I had a conversation with the student last night who said, “A couple of years ago, Johnny was really mean and he punched me and he was really bullying me, but now we are friends.”

He decided that they were friends simply because Johnny was being nice to him.

All right, being nice to you is certainly one of the requirements, but there should be more.

Helping your child believe in themselves involves.

#1 – they must internalize and believe it themselves. As the parent, you can help guide that, but don’t get frustrated if it doesn’t work right away. They are not going to believe you.

Have you ever had your child try to do something, and then they get frustrated and say, “I can’t do it.” Then you show them how to do it. You say, “See, you did it.” and they reply, “No, I didn’t. You did.”

You don’t want to step in and take over too much and destroy that feeling of accomplishment. You want to guide your child and help them to be able to do it on their own.

#2 – Be the guide until your child internalizes the belief. Once they internalize that inner circle, that becomes solid. Their Parents, Family, Friends, and Acquaintances. 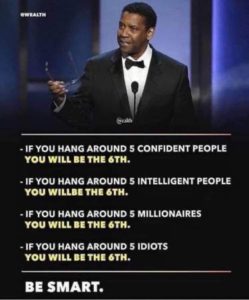 So there you have it. Working on the life skill of Belief and helping your child grow up to be successful, create your circles of influence and fill in each of those. Spend some time with your kids talking about it. And I guarantee they will believe in themselves in no time.