Karate belts are an important part of the identity of karate practitioners. The order and colors of the belts vary between different schools, but usually include white, yellow, orange, green, blue, and brown, with black being the highest rank. The wide range of colors allows for quick and easy identification in competition. Karate belts also serve as a way to track a practitioner’s progress and show their level of experience to others. Once a student has reached the rank of Black Belt, they can continue their training to earn Degrees which are usually represented by embroidered stripes on the belt. These can range from 1st to 8th Degree. 8th Degree is called “Grand Master” and is a title used for the person that created that style of martial art. 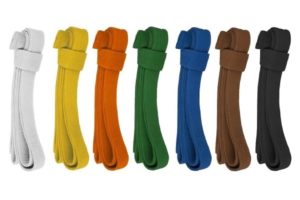 The History of Karate Belts

The history of karate belts is interesting and varied. The first karate belts were likely white, as this was the traditional color of martial arts uniforms in Japan. It is believed that the first karate belts were introduced in the early 20th century by Sensei Gichin Funakoshi, the founder of Shotokan karate. Funakoshi is credited with introducing karate to the Japanese mainland in 1922. He is also credited with adopting the white uniform and belt from judo, another Japanese martial art.

It is said that in the early days of karate belts, students did not earn different colors. Instead, they wore the same belt, and with their hard work day after day, the belt got dirty. Over time, it turned Green, and then Brown, and finally became Black after years of use. This became a symbol of pride that all of the hard work and sweat the karate student invested was visible by the dark color of their belt.

Another interesting story describes the journey after Black Belt. The student continues to wear their belt and now it starts to fray and break open to expose the inner threads just are white. This symbolized the student’s return to White Belt since earning a Black Belt is not the end of the journey but the beginning of the next level. Earning a Black Belt means the student has mastered the basics. Now they begin to learn more complex techniques and may begin to share their knowledge with new students.

A modern-day example is the education system:

While the karate belt system has undergone many changes over the years, the meaning of each color karate belt remains an important part of the martial arts. The belt colors are often seen as a way to quickly and easily identify a practitioner’s level of experience. The belt system is also a way to track a practitioner’s progress and show their level of experience to others.

While it is up to the style of martial arts to decide what belt color is earned at each level, the general consensus is to move from light to dark. The lighter colors represent beginners and the darker colors represent advanced students.

Belts have become an important part of the practice of karate and will continue to be the main form of identification of students and their skills. So much so, that many other places have started to replicate the system: clubs, organizations, and schools have introduced colors into their process as a form of grading.

If you would like to get your child started on their journey to Black Belt, check out my Beginner’s Confidence Course and learn the many benefits your child will learn while earning belts.